We were lucky enough to be invited to the Brisbane Preview of a delightfully funny movie last night.

The Most Exotic Marigold Hotel for the Elderly and Beautiful, is one of those feel-good movies the British are experts at producing. Directed by John Madden (Shakespeare In Love) it features a stellar cast, including two Dames, Judy Dench and Maggie Smith as well as Tom Wilkinson, who played Joe Kennedy in the TV Series The Kennedys, Penelope Wilton from such TV Series as Dr Who, Downton Abbey. Ceilia Imry from the TV Series Kingdom and Bill Nighy (The Constant Gardener). Ronald Pickup (The Worst Week of my Life) is brilliant as Norman. 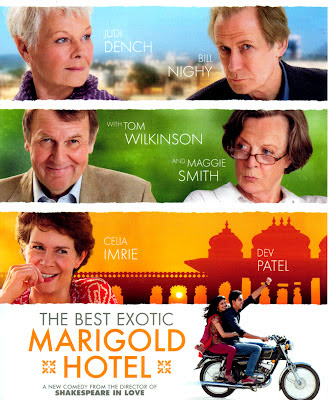 The story tells of a group of retirees, who for various reasons, opt to take up a free offer to spend the rest of their lives in, what was described in the brochures as, an exotic hotel in India. Of course upon arrival, they discover that the hotel is in disrepair, run by an exuberant young Indian named Sonny (Dev Patel) who is excited to welcome new guests, any guests, into his run-down hotel.
It soon becomes clear what the new inhabitants want from their stay in their new home. Graham (Wilkinson), a former judge, is looking for his gay lover of years ago, Evelyn (Dench), left destitute by her recently deceased husband is looking for a job to keep the wolves from her door. Muriel (Smith) a racist Londoner, who is in India for a cheap hip replacement, and hates the place, is befriended by her carer and eventually comes to love the hotel. Madge (Imrie) is looking for a wealthy lover. Norman (Pickup) pretends to be a wealthy man and is also looking for a new partner.
There is a side-story going on when Sonny's mother suddenly turns up and is planning to sell the hotel, while Sonny is trying to win over his girlfriend Sunaine (Tena Desae). By this, he is not only battling his mother but also Sunaine's brother, both being against their relationship.
Marigold Hotel is a funny, well cast and directed and edited movie which will be released to the public, in Australia on March 22. I highly recommend it.
Posted by wilbo43 at 10:00 6 comments:

We've just been to Scarborough on the Redcliffe Peninsula with our friends. No doubt you'll read more on Diane's blog, later.

Yesterday morning, Diane and I walked along the coastline for a short stroll before breakfast. I now know why the Peninsula is called Redcliffe. 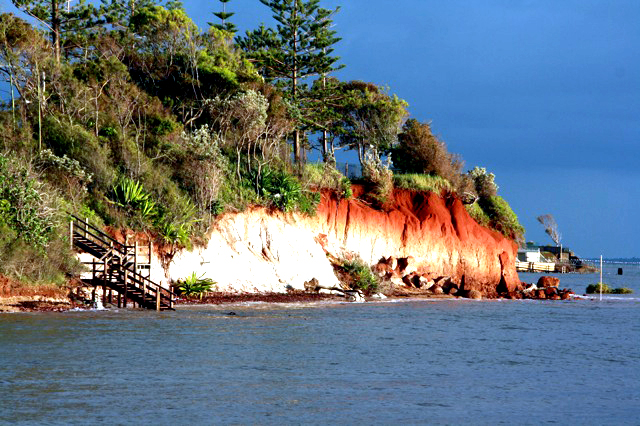 Regular readers of this blog will know that Diane and I are tutors of the local U3A (University of the Third Age) Camera Club, where twice a month, a bunch of seniors  interested in photography and video get together at the local library for a couple of hours to compare cameras, photographs and videos and to learn more about these things. We've been doing that now for over twelve months and the club is going from strenth to strength. What started with a handful of members has blossomed into a sizeable crowd, with 40 people attending last Monday. In fact the staff at the library had to bring extra chairs into the meeting room.

Here are a couple of pics, taken with my little 'pont-and-shoot' camera so please excuse the bad quality. 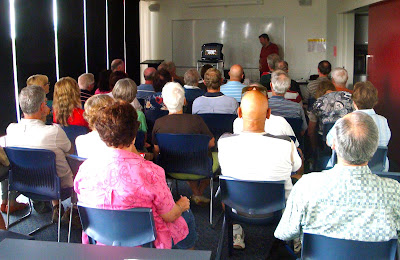 Roy, our first speaker and a member of the club, told us all out flash photography and when and how to use it.
Then we had Gabriel, a TV producer, director and editior come along and told us how to shoot video with our digital still cameras. He also showed us a video he shot on his DSLR camera on a para-gliding trip in Switzerland. 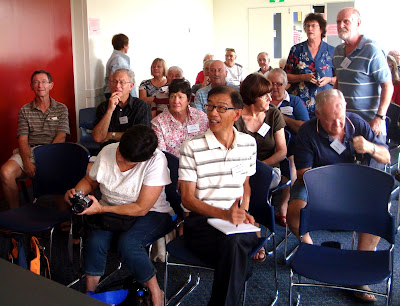 Then the members got their cameras ready and started filming in and around the library which we quickly made into a little movie clip to show the group.
Posted by wilbo43 at 20:01 No comments:

We took a trip up to O'Reilley's in the Lamington National Park, with our Swiss visitor, Silvana, who is moving on to Surfers Paradise on Sunday. It was a very pleasant day out.

No doubt Diane will write more about it on her blog ADVENTURE BEFORE DEMENTIA
Posted by wilbo43 at 19:21 1 comment:

We have a visitor from Switzerland

We have a visitor from Switzerland, Silvana is the granddaughter of a school friend of mine. So what better chance than to show off Brisbane. We took a trip into town yesterday starting off with a trip on a City Cat and ending up on Mount Coot-tha for a cup of coffee.
Posted by wilbo43 at 15:09 5 comments: