The village of Riggisberg in Switzerland

An e-mail friend of mine, who lives in Riggisberg, a farming village near Bern in Switzerland, where my father was born and grew up, recently mentioned to me that they have published a book about the history of Riggisberg and she mentioned that my uncle was in it complete with photograph. Naturally I was interested and found out where the book is published, sent away for it and it arrived.
So let me tell you a little about our ancestral village of Riggisberg. 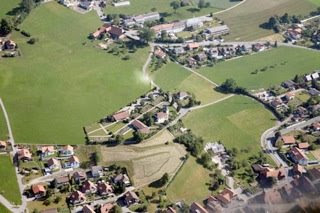 Areal view of Riggisberg
Riggisberg is a typical farming village in the canton Bern and the ancestral place of the Böhlen clan. The population in 2005 was 420.
On the 1st July 1943, during world war II, parts of Riggisberg were accidentally bombed by the Americans who were flying south to Italy for bombing sorties. The plane got into difficulties and they had to jettison weight so they decided to drop the bombs. It was night time and the houses were blacked out as they are in war time, so the pilot couldn't quite establish where to drop the bombs. As luck would have it, most of the bombs dropped either north or south of the village and only one house in the centre copped one of the fire bombs. No one got killed.
Marianne a distant cousin-in-law from Konolfingen sent me the following article that appeared in the Secondary School History:
The most exciting event at that time, was the dropping of bombs on July 1st 1943. It was school excursion time. On the day before, the pupils pestered the teacher to leave early. However the teacher, Mr Weibel declined, stating that it was not favourable, a Storm was brewing and it could rain cats and dogs. It didn't rain cats and dogs, but 230 fire sticks and bombs, the biggest a 500kg bomb which exploded in Moosmatt, about 500m south of the school. Many houses on the southern side of the village suffered damage though the air pressure. The high school lost 94 window panes and doors. Next morning, the pupils would have liked to go and investigate the ruins and the bomb crater but for two hours, they had to remove glass and wood debris before they were dismissed. 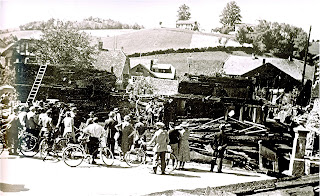 The 'Chorberhüsi' (basket house) in the village burnt down 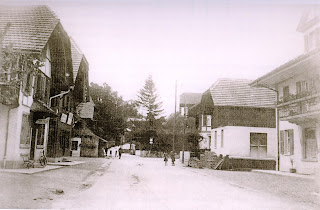 The main street (The barber shop left) ca. 1940
My grandfather, had a grocery shop in the village which was later converted into a barber shop when my uncle Hermann, a barber by trade took over the building. In the book, he is described as a funny man, frequently joking with his customers. On one occasion, while he was on the telephone to a lady friend, he was supposed to have told her 'I'm sorry, but you smell of garlic!' To which she replied 'It can't be me, I haven't eaten anything like that at all!' 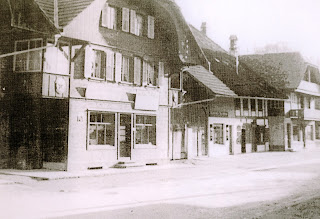 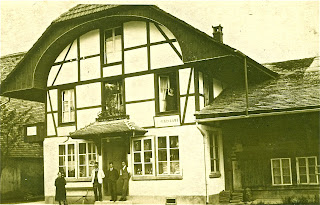 The family home which was first a grocery store.
In front, Granddad, my dad and Hermann with
their sister Rosa in the window of the 1st floor
ca. 1928 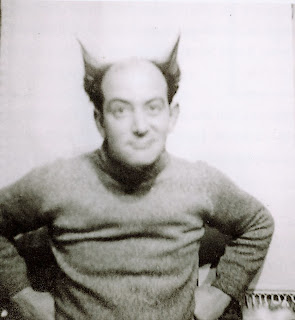 Uncle Hermann, barber and comedian
Uncle Herman was also an accomplished singer and musician. He built his own alphorns in his workshop. Both him and my dad were amateur actors, frequently appearing in local productions.
Unfortunately Hermann suffered a fatal heart attack in his 40s when I was in primary school. He was half-way through making me an alphorn when he passed away. I could only look at it on the day of his funeral. It was never finished.
Posted by wilbo43 at 10:20 7 comments: