Every now and then you come across a fabulous book. At the airport on Wednesday, while we were waiting for our flight to Sydney, I strolled into the book shop next to the coffee shop we were sitting in. There it was: 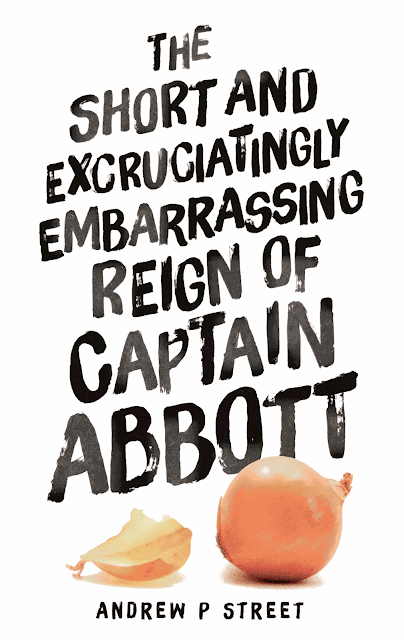 Just the sort of funny book I like while away from home. I started reading as soon as we were off the ground and was hooked by the time we got up to cruising speed. Now, I have never been a fan of Abbott so maybe, just maybe I am a little bit biased against this bloke who has absolutely no nous for politics, why else would he knight the Duke of Edinburgh.

Andrew covers just about every gaffe and blunder the Abbott government committed during their short turn.

The book is written exceedingly funny. Andrew rightly points out that it is very difficult for a leader to find people who will tell him that something is "a really bad idea". With this in mind, Andrew guesses a possible conversation between Abbott and an imaginary staffer:

This is just a great book describing a very embarrassing period in Australian politics. Let's say about 55% of the Australian population will find it very funny while 45% of the population may not, but at least cringe, one hopes.

I strongly recommend it.

We needed some landscape pictures for our session on Monday at the camera club. Although we have plenty in our archives, we decided to take a walk along the recently refurbished riverwalk from New Farm into the city. About 4 km. So we drove to New Farm Park and set off for our hike.


About half way along the river walk, we veered off in search of a coffee shop. We didn't have to walk far. We found one in Moray Street, called The Moray Cafe.
The previous river walk was floating, rising and falling with the tide of the river. However a couple of years ago, Brisbane flooded and the current was too strong for the floating walk and it floated all the way down into Moreton Bay. The Brisbane City Council replaced it at great cost to a fixed model, hopefully strong enough to withhold any future floods.

When we arrived in the city, it was just past lunch time, so we joined the city workers in one of the many river pubs for a delightful lunch and a few glasses of refreshing water. YES - WATER!

After lunch we hopped on a City Cat back to New Farm Park.


It was an enjoyable day out and we got our landscape (or should I say waterscape) shots for Monday.