The Bärengraben (Bear Pit) has long been a top sight in the Swiss capital Bern. However, from October 2009, a new BärenPark (Bear Park) replaced the old-fashioned pit. Bears, the symbol and name-giver of Bern, will be able to roam freer in the new park and in keeping with more modern notions of humane animal care. The new Bern BärenPark is located adjacent to the bear pits at the Nydeggbrücke Bridge across the Aare River. Visiting the bears has long been very popular, especially with children, when traveling to Bern and the new bear park reflects Bern’s love of the bear better than the old pits.

The old Bärengraben (bear pit) first opened in 1857
Animal rights organisations have long complained about the way the bears had to live in these concrete pits. So in 2009 a new home was opened for the two remaining bears Finn and Björk, next door in a new bear park. The new bear park opened in 2009
In December 2009, Björk gave birth to two adorably baby bears, named Urs (male) and Berna (female) and they are now the talk of the town, especially since they have now made appearances in public. 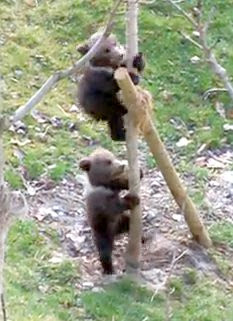 Urs and Berna explore their new surroundings
For more information on the Bern Bear Park - CLICK HERE
Posted by wilbo43 at 12:49 4 comments: