Bernard Curry is in the TV Magazines again

Our daughter Sonya's partner, Bernard Curry is on the front covers of the Television Magazines again this week, for the 3rd time this year.

Bernard plays dive master Hugo Austin, in the Channel 7 drama Home and Away and also hosts the hit show Beauty and the Geeks Australia, also on Channel 7. But it's his Home and Away part that gets him all the attention at the moment. You see, his character Hugo, who, until now has been seen as a nice chap, looking after his brothers, has dark secrets. It has just been revealed that Hugo is actually married. Shock, Horror! How about his relationship with Martha? 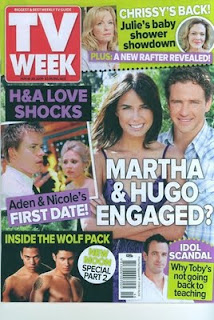 Bernard on the front page of TV Week

So, presently Hugo is the talk of the town. What will happen in Summer Bay? How will his relationship with Martha end up? 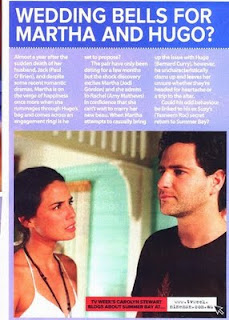 How will the relationship with Martha end?

Together with other cast members of Home and Away, Bernard was part of the Celebrity Line-up at the recent Melbourne Cup, for our overseas visitors, that is the horse race that stops the nation. 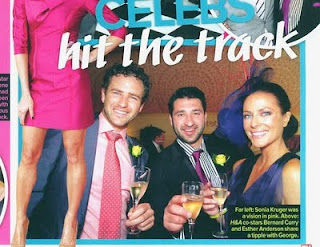 Bernard Curry and Esther Anderson share
a tipple with George.

So, as we went shopping this morning, we saw another TV mag, one we have never bought before, but when we saw Bernie on the cover, we had to buy that one as well. 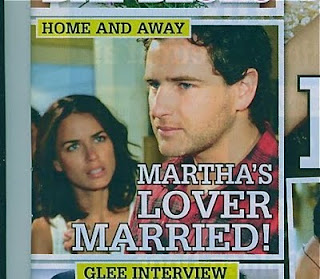 Hugo and Martha on the other TV Magazine cover 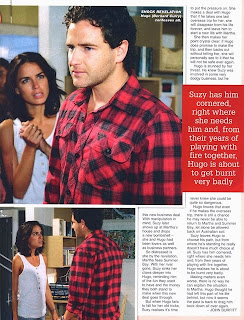 Inside, the story of course - Hugo and Martha's relationship

Of course, the inside story revolved around the recent revelation that Hugo was already married. A lot of fun really but in the meantime, Bernard's popularity increases which can't do his career no harm.