Over Easter, my favourite TV channel UK-TV, is broadcasting wall to wall crime dramas. I've been watching enough crime dramas on TV over the years that I'm sure I could write an episode or two of a new series myself. So, let's have a go:

I don't actually have a plot yet but I certainly have the charecters needed for my police drama. My police team is headed by Chief Inspector Joe Blowe, 45 years old, 6ft tall, dark hair, unattached, a bit of a loner, not a career officer, doesn't often see eye to eye with his superior, Chief Superintendent Roger Birdwhistle.

D.C.I. Blow is ably assisted by D.S. Susie Horn, 30 years old, blonde, recently separated from her recent boyfriend and now prepared to totally emerge herself into her job as a crime fighter. Then there is young D.C. Malcolm Short, who looks like he's still in high school, a bit slow when it comes to detection, but not complaining when he is sent out to watch a phone box for hours on end, by his D.C.I. or D.S. .

How am I doing so far?

Ok, here's where you can help me. Let's write a plot.

We need a bunch of crooks. We need Crook A to commit  a murder, which we'll show with the murderer in silhuette so that the audience is unable to determine who is committing the murder but is still being drawn it to watch the drama because they want to find out what's next. We need to introduce suspemse into our show, but first we need to set the scene where a member of the public nonchalantly aproaches the murder scene, accompanied by suspense music. Must remember to contact my son-in-law, David, he is a BBC composer. Our member of the public, finds the body, preferably a spinster woman who has the ability to let out a blood-curdling scream upon finding our victim. 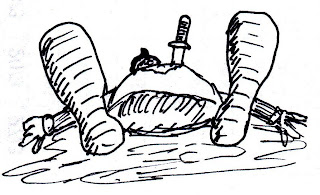 Ok, now we introduce our police team, who need to assemble an incident room, somwhere in a disused hall or maybe the local police station. We need a whiteboard, a few Apple computers, an A3 colour printer to print the photos of victims, suspects, crime scene etc for the whiteboard. Ah, I forgot, we need pathologist, female, brunnette, witty, single and we need to give her a bunch of sandwiches to eat during the authopsy.

We need to throw suspicion on Crook B, who has motive, opportunity, no alibi and is a nasty character. The audience will be certain he did it. Or maybe Crook C could have done it for the same reasons outlined in Crook B.


We now need to stretch the next hour with friction between the team, sexual tention between D.I. Blow and the pathologist before coming to the chase.

During the chase, we need the suspects at one stage to crawl through an internal ventilation duct, which is spottlessly clean inside, well lit and not a screw prodruding inside. We get the suspects being chased to climb up and up preferably onto a roof with no escape ladders but still able to get away somehow.

We're now into the last 15 minutes of our show. So what do you reckon? Shall we assemble the whole cast in the local pub with D.I. Blow, cleverly pointing out that Crook B could have done it, or Crook C could have done it but after some more suspense (with music) announce that it was indeed Crook A who done it. OR:

Should we catch Crook A, who has been trying hard to 'do a runner' and simply get him to confess to the murder?

Maybe you have an other ending.

Have a great Easter!