I've had my left cataract operated on yesterday, The op itself was ok, but the waiting....

We rocked up at a quarter to one on an empty stomach as requested. Sat down and went through the admission procedure with the receptionist at the Eye Clinic. Then she got us to sit down in a full waiting room. Lots of elderly couples, just like us. An hour later a nurse called my name and took me into her office, where again, we went through all the details of what's going to happen and my full medical history, all while dropping eyedrops in my eye every few minutes, that took about 15 minutes, then she put on a blue gown (on me, not her) and placed me in another waiting room full of other people in gowns. She told me to wait until someone would call me through either of the two doors leading somewhere else. There were lots of magazines but nobody was reading them. Just like me, they couldn't see. Another hour later, one of the doors opened and another nurse called my name. It was yet another office and sitting down, the anaesthetists' nurse went through the same questions the other nurse and receptionist went through. I guess they want to make sure your correct eye is done and not your left kneecap.

Then the anaesthetist came and spoke to me and explained that normally they give the patient an injection into the eye as a local anaesthetic but due to a particular drug I take, they couldn't do that as there is a risk of bleeding behind the eye, which could result in blindness. Instead, they would put me on a drip with something to make me drowsy and then anaesthetic drops in the eye. He told me that because of that, I would probably feel the procedure. Great!! I love pain (not).

Another 15 minutes later, I was eventually taken to the operating theatre and placed on a bed. The medical staff then carried out their duties of preparing me. The anaesthetist inserted a canulla and told me, 'I'm going to give you something to make you relaxed.'

A minute later, a nurse said, 'Mr. Bohlen, can you sit up, and follow me.' I asked, 'where are they going to do the operation?' 'Oh, that's all over', she said. Apparently I slept through the whole procedure. I never felt a thing. She took me to a third waiting room, presented me with a plate of sandwiches and a cup of coffee and that was it. 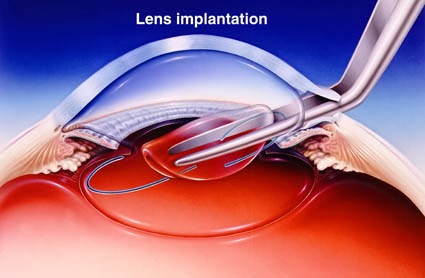 This morning I had an early appointment with the eye surgeon in his rooms at Springwood and he explained exactly what they did. If you want to know what is involved, CLICK HERE

The eye surgeon removed the bandage, checked the result and after declaring the operation a success, sent me on my way. Now it's suddenly as if someone had turned on the lights or increased the brightness slider on my brain. It's wonderful.