We went to the movies this moring with friends to see Quartet. I can highly recomend it. 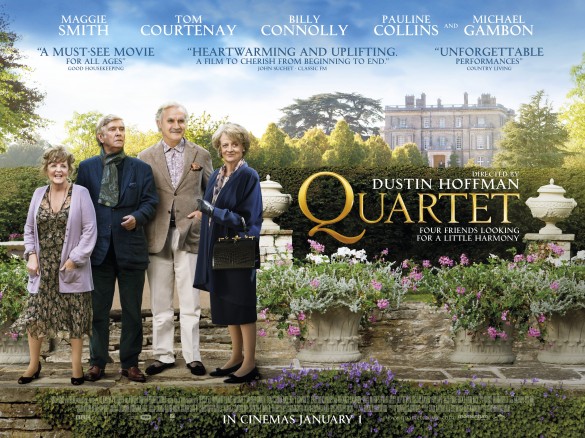 Just released, Qartet is one of those great comedies only the Brits can produce, although with the help in this one by freshman director Dustin Hofffman.

Picture the scene: We’re in Beecham House,  a retirement Home for retired opera singers and musicians, similar to the Casa di Riposo per Musicisti in Milan, founded by composer Guiseppe Verdi himself, only this one is in rural England, but it even looks similar to the original. The residents, instead of playing bingo and bowls are practicing their former metier in music. There are singers rehearsing Gilbert and Sullivan, while others play orchestral instruments including trumpet and clarinet.

Enter retired opera diva, Jean Horton (Maggie Smith / The Best Exotic Marigold Hotel) who was once married to tenor Regy Paget (Tom Cortenay / Little Dorritt) for 9 hours. Regy never forgave Jean after she confessed having an affair with another opera singer just after their wedding and has been trying to forget the unfortunate incident all those years ago. But now Jean has moved into the same home and old wounds are opened up again.

Beecham House is run by Dr Lucy Cogan (Sheridan Smith / Benidorm) and money is tight to keep the home operational. Another resident, Cedric (Michael Gambon /Maigret), a former director of opera, sees an opportunity to reunite the famous quartet for an anniversary concert to celebrate Guiseppe Verdi and to raise much needed funds to keep Beecham House going. The Quartet consisting of Jean, Regy, Wilf (Billy Connolly / The Man Who sued God) and Cissy (Pauline Collins / Shirley Valentine) who suffers the onset of Alzheimer’s but never-the-less tries to convince Jean to join them.  Of course Jean thinks resurrecting the quartet is preposterous and refuses to consider doing so. But petty jealousy between divas finally delivers the quartet to the stage for a last performance of the famous Rigoletto quartet in Act 3.

There are some very funny lines in the script by Reginald and Donald Hardwood, beautifully delivered by an outstanding ensemble cast.  Billy Connolly as the resident dirty old man is superb, as is the conductor, Bobby Swanson (Andrew Sachs / Faulty Towers). Anyone with an ounce of love of comedy, opera and classical music will highly enjoy this movie. Anyone not enjoying ‘Quartet,’ I feel sorry for you.