I am getting to know Luminar by MacPhun. I am very impressed, It has some fantastic functions and is much easier to use than Lightroom but just as powerful. When you purchase the program, you get a couple of folders with replacement skies, so if your sky is a little dull, you can replace it.

Here are some more images I have played with the last couple of days. On the left, the raw photograph on the right, processed with Luminar.

The first was taken at Cleveland during a sunset. The foliage of the trees and the rest of the foreground was clearly not visible. Moving a couple of sliders in Luminar and everything can be seen.

The image below was taken in Tenterfield. It is just a little boring. By changing the sky, increasing the green colour and enlarging the tree, the image looks much better.

Early morning on the golf club produced a fairly flat image. Just a few adjustment in Luminar and the picture looks much better.

In the image below I just replaced the boring sky to improve the shot.

I had a wrong setting in the shot below and it was grossly underexposed. These things are easily fixed in Luminar.

Diane posing with a runner in the Blue Mountains, offered the perfect image to tweak. I cleaned up the tree trunk a little and generally boosted the image.

And finally the lighthouse at Cleveland Point. I didn't do much to this image, except removed the street light, cars and other objects. Removing objects in images is much easier to do in Luminar than in Lightroom. The clone and stamp function actually works. You have a job, removing stuff in Lightroom. 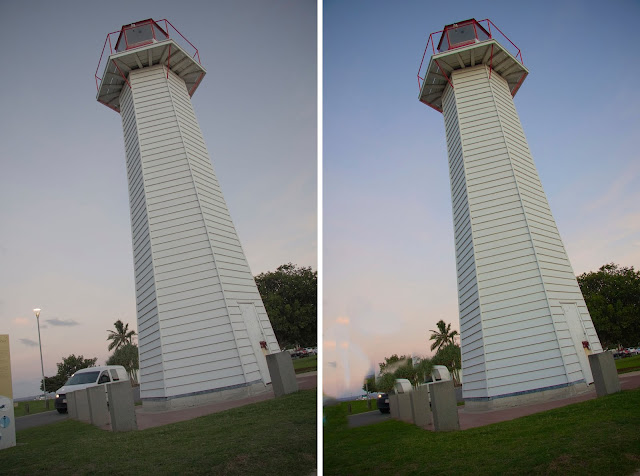 I keep practicing with Luminar.