Diane and I went into town yesterday to the Multicultural Festival at the Roma Street Parklands. Seeing the 4EB broadcast van there brought back some memories for me. 4EB-FM is a public broadcaster. For 20 years, (1979-1999) together with a small group of volunteers and with help from Swiss Radio International, we presented the Swiss Program on 4EB broadcasting to Swiss compatriots in the greater Brisbane area.

Of course in those days the station was an AM station with limited coverage and not very powerful transmitters. 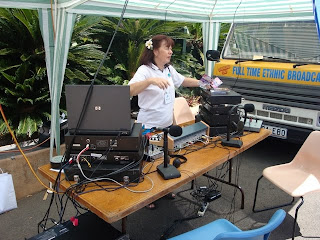 Today, 4EB-FM broadcasts on the FM band with much more powerful transmitters. 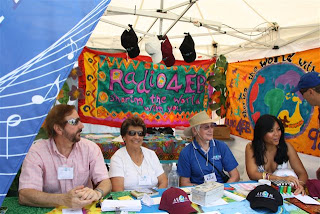 Some of the faces of 4EB remain the same, forever volunteering their time and efforts to the Brisbane Ethnic communities. 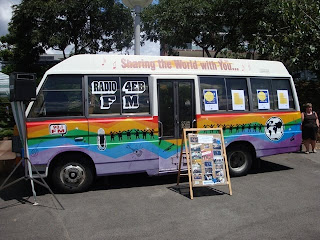 The Radio 4EB-FM Outside Broadcasting Van
Even the present broadcast van is more modern than the old van we had converted into a studio. 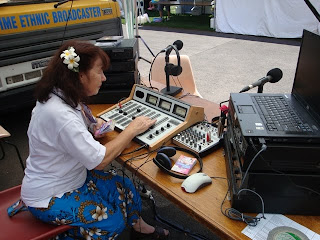 Radio 4EB broadcasting from the Multicultural Festival
While we were there, the station was broadcasting in the Italian language.
I started broadcasting the Swiss program in 1979, just after the station went to air in a make-shift studio in a flat on the 1st floor of a fruit shop in West End. There was not much of a wall around the cubicle and whenever the red microphone light came on, everyone in the station had to be quiet.
In 1981, we finally had managed to build a reasonable studio area, with two broadcast studios and a common room-library and an office in the industrial area of South Brisbane. We really thought we had come up in the world. 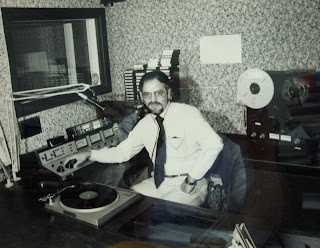 In 1982 at West End
In 1988 we had built a proper studio complex in Main Street Kangaroo Point in our own building with three broadcast studios, a performance studio with control booth and a proper office with full-time staff. This is still the present home of Radio 4EB-FM. 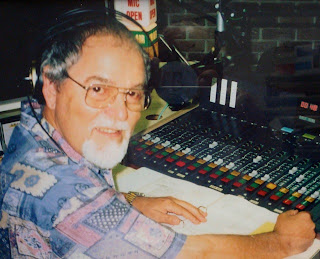 In 1999 one of my last broadcasts
With the arrival of the internet and access to real-time radio stations in Switzerland on the internet, the Swiss Group decided to cease broadcasting material that was really over a week old by the time it went to air in Brisbane, and with less and less listeners tuning in, it was time to give up. However Radio 4EB-FM still broadcasts in over 50 languages.
Listen here to Radio 4EB-FM live
Posted by wilbo43 at 14:58 6 comments:

In my next life

In my next life, I want to live in Traunstein in Germany and work for the Wochinger brewery.

I just read in the weekend edition of the Courier Mail, that in the Wochinger brewery in Traunstein, Bavaria, Germany, a century-old agreement decrees that every month, each worker receives an allowance of 70 liters of beer. (Just over 18 gallons). I assume they get paid as well.