On the opening screen click WATCH ON YOU TUBE

Sonya, Bernie and Fox are back in OK Magazine. After another succesful 'Beauty and the Geek Australia Series,  OK Magazine foundout that Sonya is pregnant with their second child. 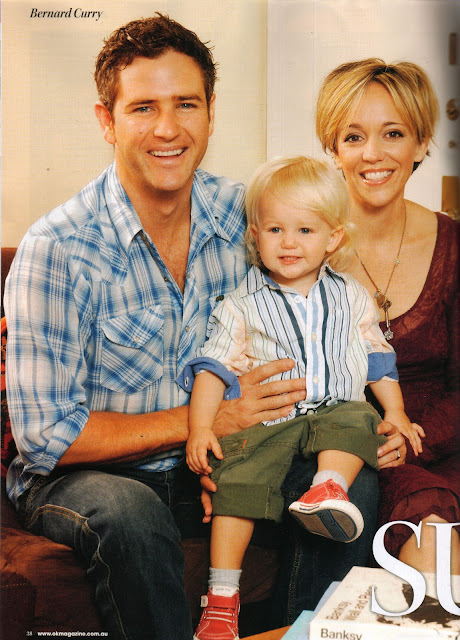 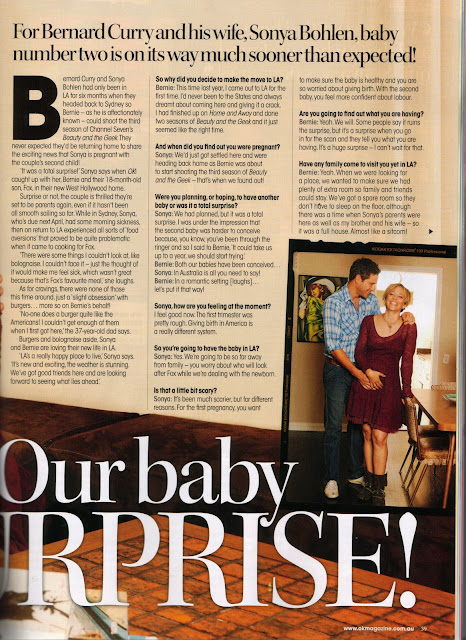 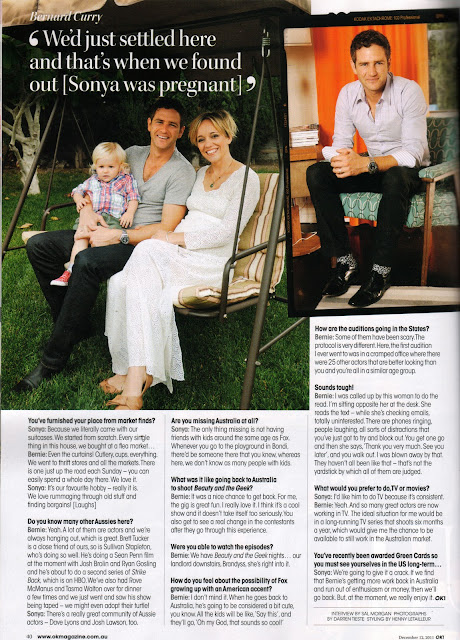 Tomorrow morning we meet again with the U3A Camera Club. We're discussing the subject of Depth of Field especially when taking shots of flowers. I tried some, not with flowers, but with a frog. 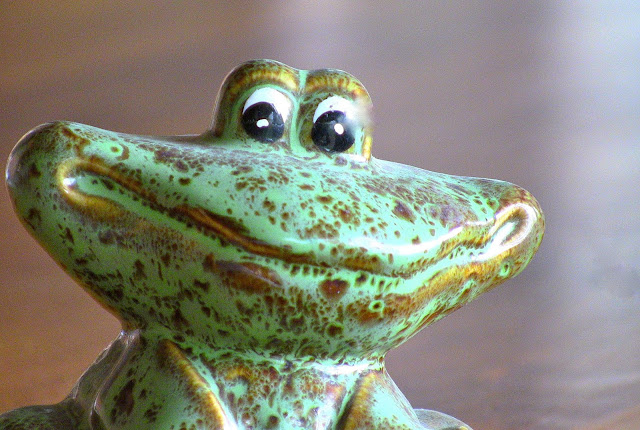 In Port Augusta S.A. recently, we jumped onto the Afghan Express to Quorn and back. It's a historic Steam Train trip, most enjoyable. I made a little video of the trip:

I love steam trains. This coming Sunday we are taking another steam train ride from Brisbane Roma Street station to an unknown destination but end up back at Roma Street.
Posted by wilbo43 at 22:40 5 comments:

We visited our friends Ben and Lyn on the Gold Coast today. Ben showed me a present he received from his sister in Switzerland. It's a 'Brätzelieisen', an electric heat press used by the Swiss to make these delicious little cookies, ususally around Christmas, but hey, we decided to try it out, so while Diane and Lyn were busy on the computer, Ben and I went to work in the kitchen.

First we mixed all the ingredients in a bowl:- 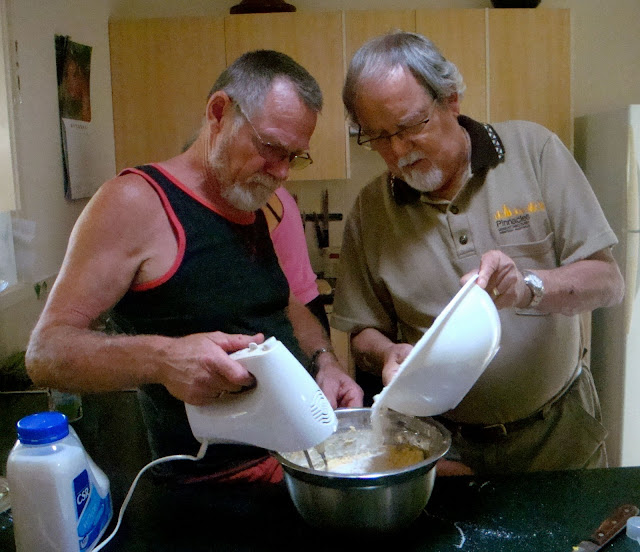 Then we split the work. I rolled the dough into little balls and Ben placed them onto the hot forms in the machine, four at a time. 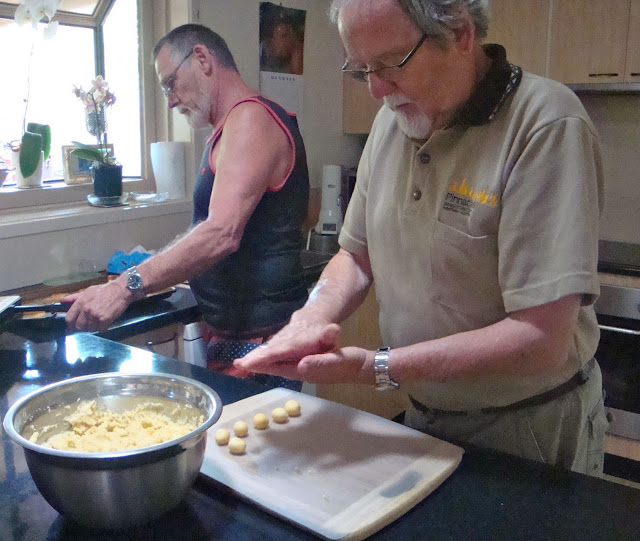 Then we reversed roles and I took a turn baking the cookies. 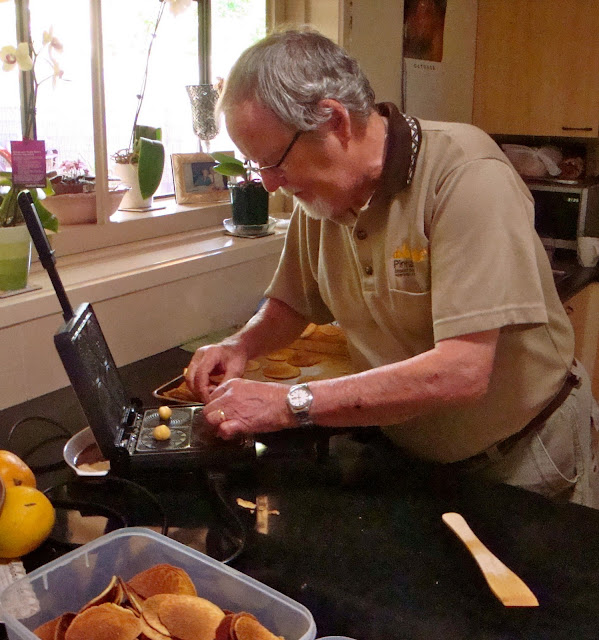 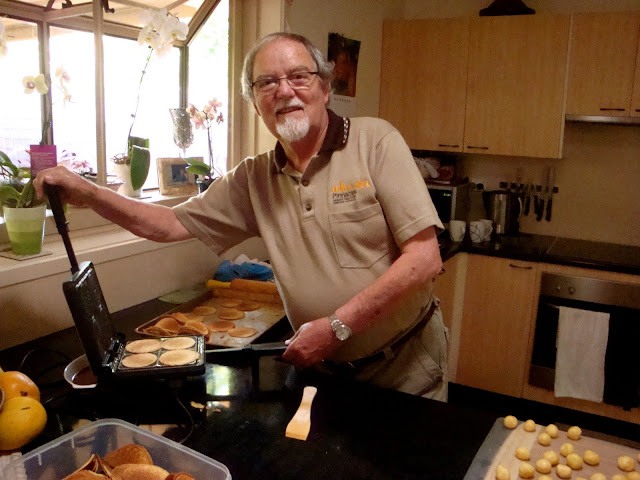 After a few minutes, they turn golden brown. The smell in the kitchen was very pleasant. Some of the Brätzelis we left to cool on a rolling pin which gives them a nice curve. 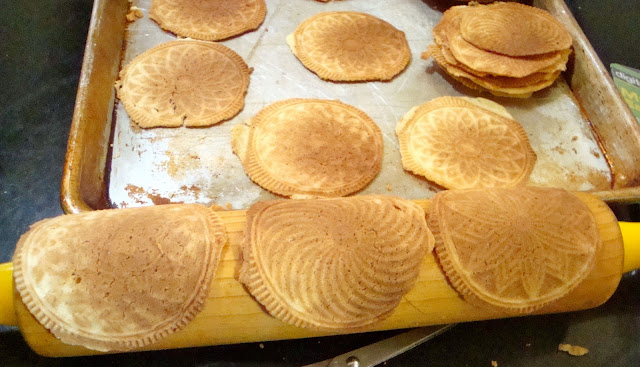 We were very proud of our first attempt to make some of these delicious cookies. 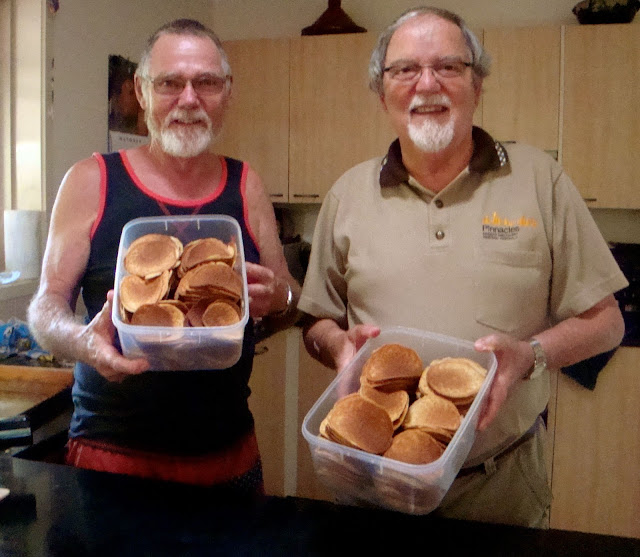 I don't think they'll last until Christmas
Posted by wilbo43 at 18:55 5 comments:

After we surfaced again, we were taken into the gold toom where an employee cast a genuine gold bar. Unfortunately we couldn't keep it.

Here's a little video of the experience... 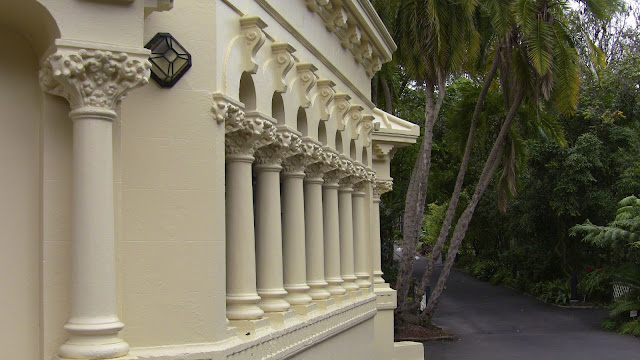 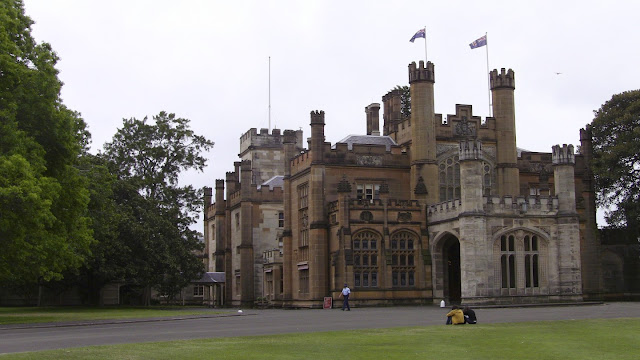 After lunch we took a tour of the Gothic Revival Government House, also located in the grounds.
Posted by wilbo43 at 20:16 3 comments:

A Lunch Outing with Family

It's good to be in Sydney with Carol-Ann and David. To mark the occasion, the four of us went to Watsons Bay to the famous Doyle Seafood Restaurant for lunch.

Back in Sydney, we are staying with our daughter carol-Ann and son in law David for a few days before we fly back to Brisbane on Sunday.

Another thing we have on the Bucket List is the Indian Pacific Train. This train travels between Perth and Sydney. A little too long for us, so we're just doing the last leg between Adelaide and Sydney. It is still a 24 hour journey, surely long enough to sit on a train. We do have sleeping cabins.

Back at the Mercure Grosvenor in Adelaide, we are vising the Adelaide Zoo and the Botanical Gardens today.

Leaving beautiful Hahndorf this morning, we travel to Birdwood on the way back to Adelaide. Birdwood has the Australian Motor Museum which we'll visit while we're there.

This morning we are driving to another historical township Hahndorf in the Adelaide Hills. We've been there a few times before but always love it. I particularly look forward having dinner there tonight in the german Pub. Bratwurst and Sauerkraut og course.

Today we drive to the historic township of Burra in South Australia. Diane has a college friend there, Val, who we briefly saw on our Lake Eyre trip. We promised her we would return so today we'll meet Val again.

I guess I'll let them talk me into joining the group on this Eco Tour thoday. We'll see.

I have been a train buff all my life and the Afghan Express has always been on my 'Bucket List', ever since we saw the train when we visited Lake Eyre. So now we are doing it. The Afghan Express service turns the clock back to the 1930s when the famous old Ghan travelled through the Pichi Richi Pass.  Wherever possible, the Afghan Express uses distinctive timber-bodied carriages built in the late 1920s for the narrow gauge old Ghan train service, and restored old Ghan steam locomotive NM25.

Original Ghan steam locomotive NM25 with the Afghan Express in the scenic Pichi Richi Pass.
The Afghan Express is the name railwaymen gave to the passenger train that ran from Terowie to Oodnadatta, through Quorn, in 1923. This was the first time a sleeping carriage was included on the train, and when an Afghan passenger alighted at Quorn to recite his evening prayers, the train was dubbed the Afghan Express by railwaymen. In time, this was abbreviated to The Ghan and eventually used by CR officials.
Posted by wilbo43 at 05:40 3 comments:

We are now a 6-people group, having met Ann and George in Adelaide. Most of the Birthday Bear Group which you may know from Diane's blogs. So in a people mover, we're driving north to Port Augusta.

Up Up and Away with the flying Kangaroo

Today, we leave Westarn Australia and we fly to Adelaide in South Australia, a 2 1/2 hour flight.

We are booked into the Mercure Grosvenor Hotel.

Back to Perth for the Final Time

We are heading to Perth again today where our APT Tour ends.

Today, we travel to Geralton.

Today, we travel to Monkey Mia, famous for its Dolphin Feeding on the beaches.

After another night in Perth, this morning we are heading north to Kalbarri. 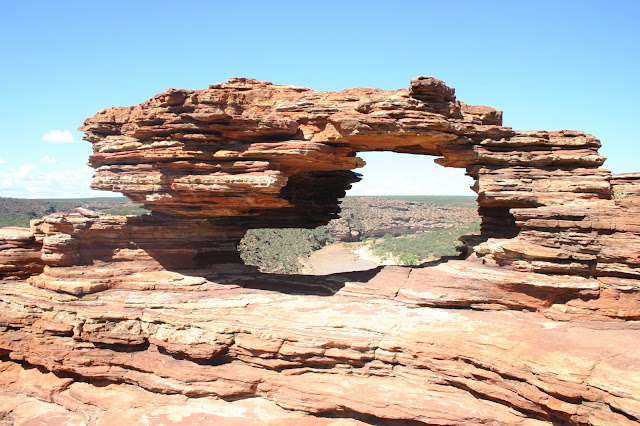 Cruise back to Perth

Leaving Freemantle, we get off the bus and onto a river cruiser back to Perth.

This morning we visit the harbour town of Freemantle with its fabulous colonial buildings. Freemantle was the port from where Australia II liberated the 'America's Cup' in 1983 from the New York Yacht Club  where legend had it, it was permanently bolted down.

Margaret River, south of Perth is a terrific wine region. We have been there before. But today we again visit Margaret River and I am looking forward to see the region again.

Today the tour is going on a whale-watching cruise (without me - I don't do boats), but Diane will enjoy herself.

This morning we drive to Albany

This morning we are driving to Esperance.

Esperance is a large town in the Goldfields-Esperance region of Western Australia, located on the Southern Ocean coastline approximately 720 kilometres (450 mi) east-southeast of the state capital, Perth.

The Mining Town of Kalgoorly

This morning we are driving through the wheatbelt to Coolgardie for a vosot to the Gold Museum, then on to the mining town of Kalgoorlie. 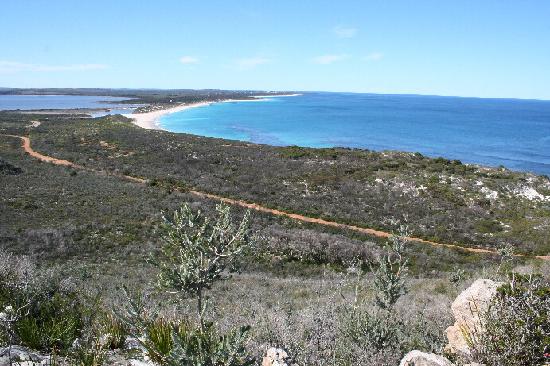 We join our APT Tour doday

Today we are joining our APT Tour of Western Australia. We start crossing the jarrah forests of the Darling Ranges to historic York then to the quaint outback town of Hayden and explore the natural wonder of Wave Rock.


Tonight we stay at the Wave Rock Hotel in Hayden
Posted by wilbo43 at 05:54 2 comments:

Up up and Away (AGAIN)

We're off again on another trip. This time to Western Australia for a Wildflower Tour then to South Australia for some exciting train journeys.

On Monday we're off again

Monday morning we're off again on another trip, this time to Western Australia and to South Australia.

From Monday on, you can follow us once again on our journey on this blog which again will be updated automatically every day.

Have fun following us...

Diane is very proud of our garden. It's spring and once again the garden looks great as you can see in the video below.

See if you can spot the gardner....

The Making of an Artist

The Geeks and their Girlfriends are back

Sonya, Bernie and Fox are in Sydney for the recording of the new series of Beauty and the Geeks - Australia for Channel 7. Bernie is the host. He took us to the mansion yesterday where they are filming the show.

I am not allowed to show or reveal much but a couple of shots are permitted.

The back of The Mansion

Bernie in his make-up trailer getting ready for the shoot.

We also met some of the contestants. The show goes to air later on this year, this year with ten episodes.

Things you see in Bondi Beach

The things you see in Bondi Beach. Talk about 'Free to Air TV.'

We are in Sydney, visiting the family. Last night we had dinner with all of them, it was great.

Click to enlarge picture
- Posted using BlogPress from my iPad

On our recent trip to Chicago, we had dinner at the famous 'America's #1 BBQ Steakhouse, Carson's. We were not disapointed the steaks were huge, succulent and very tender. If I'll ever return to Chicago, I'll eat there again.

Our USA trip video is finished

The Things you see in Bondi Beach

Spotted in Bondi Beach. Talking about 'Free to Air TV'

I found New York to be a great city. Enjoy the clip

Here's the video footage of my bear encounter in Yellowstone National Park. I got such a shock when this bear walked right by me that it took some time for me to focus the camera. The grizzly followed a few minutes later.

I guess, everyone knows something about one of the most famous roads in the world, Route 66 which ran from Chicagp across the USA to Los Angeles. It was a also known as 'Main Street of America'. Route 66 was officially removed from the US Highway System in 1985 as it did no longer fit into the new US Road Numbering System.

Portions of the road that passed through Illinois, Missouri, New Mexico and Arizona have been designated a National Scenic Byway with the name of 'Historic Route 66'. Whatever its name, it terminated in Santa Monica CA where the famous sign still stands. 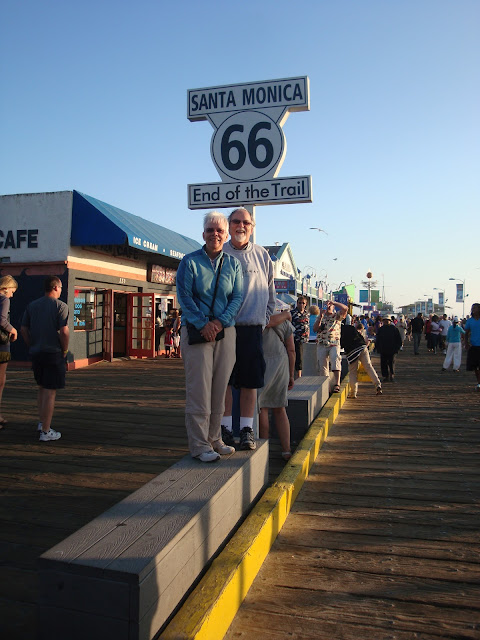 At the end of the Road (Route 66)
For more information on this historic rout
CLICK HERE
Posted by wilbo43 at 10:27 7 comments:

Foxy took his first steps yesterday and we were here to see it. How lucky was that?

Alas our US trip has come to an end and we're flying back to OZ tonight.

We are back in Los Angeles with Sonya, Bernie and Fox. We fly home tomorrow night.

We went to the Apple Store in Hollywood where we bought the iPad before we left for New York. They fixed it so now I can post blogs with the iPad, so we'll need to do the trip again.

Diane in the helicopter flying into Grand Canyon.

Flying over the Colorado River Nevada

It was an amazing trip. We travelled 6,687 km from New York to L.A. Through the heartland of the United States and we saw some amazing things.

My blog is now over but I'm sure Diane will post more details on her blog when we get home, so stay tuned and thanks for watching and commenting.