On the Trams Again

When we visited the Sydney Tramway Museum last month, I bought a book on the Brisbane Tram Systems I used to ride on every day from and to work in the 60s. In 1969, the then Lord Mayor Clem Jones made the worst decision he ever did. He stopped the trams that used to carry hundreds of people around the city day in and day out. He stopped them in the idiotic belief that they 'didn't fit the image' anymore and converted the public transport system to buses.

Upon flying back to Brisbane, I put a visit to the Brisbane Tram Museum onto my Bucket List. Well, yesterday, we drove out to Ferny Grove to visit the Brisbane Museum which is only open on Sundays between 12.30 and 4 PM.

99 was rebuilt in 1945 on the frame of a previously withdrawn car. It was specially built for the steep climb up Edward Street to Gregory Terrace
The people running and operating the trains are all volunteers. They also maintain the tracks and carriages.
During operation of the museum, the trams are constantly running and are swapped throughout the day.
554 and 429 were the last trams built in Brisbane. 554 was one of eight, built to replace the 65 trams that were destroyed in the Paddington Depot fire in 1962. It incorporates parts that have been salvaged from the fire. 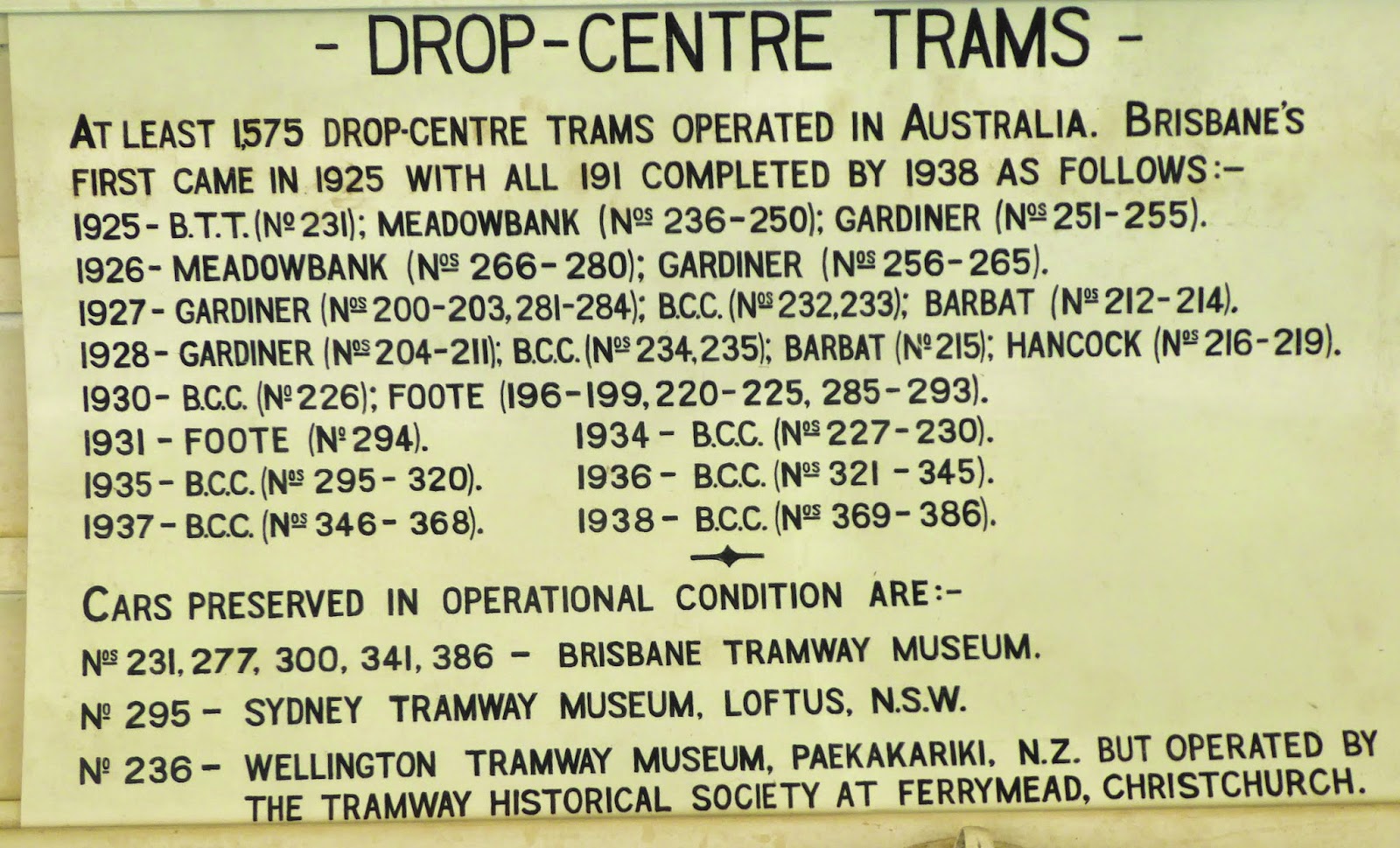 341 is one of the largest trams that was built in Brisbane in 1936 and is known as a 'drop centre' car. They were known as THE TRAM.
In the late 60, when I lived in Brisbane, I used to catch the tram from the Treasury Building in town to Mater Hill on the south side. I was a smoker then.

I added a little video I shot yesterday:

We had a notice in the letterbox a few days ago


DEAR HOUSEHOLDER,
WE ARE WORKING ON THE ELECTRICAL SYSTEM
ON TUESDAY, THIS IS TO ADVISE YOU THAT
THE ELECTRICAL SUPPLY TO YOUR HOUSE
WILL BE SHUT ON TUESDAY BETWEEN
8.00 AM AND 3 PM.
WE APOLOGISE FOR ANY INCONVENIENCE.
YOUR POWER SUPPLY COMPANY

So we boiled the jug before 8 AM and filled up a large thermos flask to make the occasional cup of tea. The Blogger had a medical appointment and I turned off all my computers and got stuck into my book until the utility vehicles arrived around 9 o'Clock. 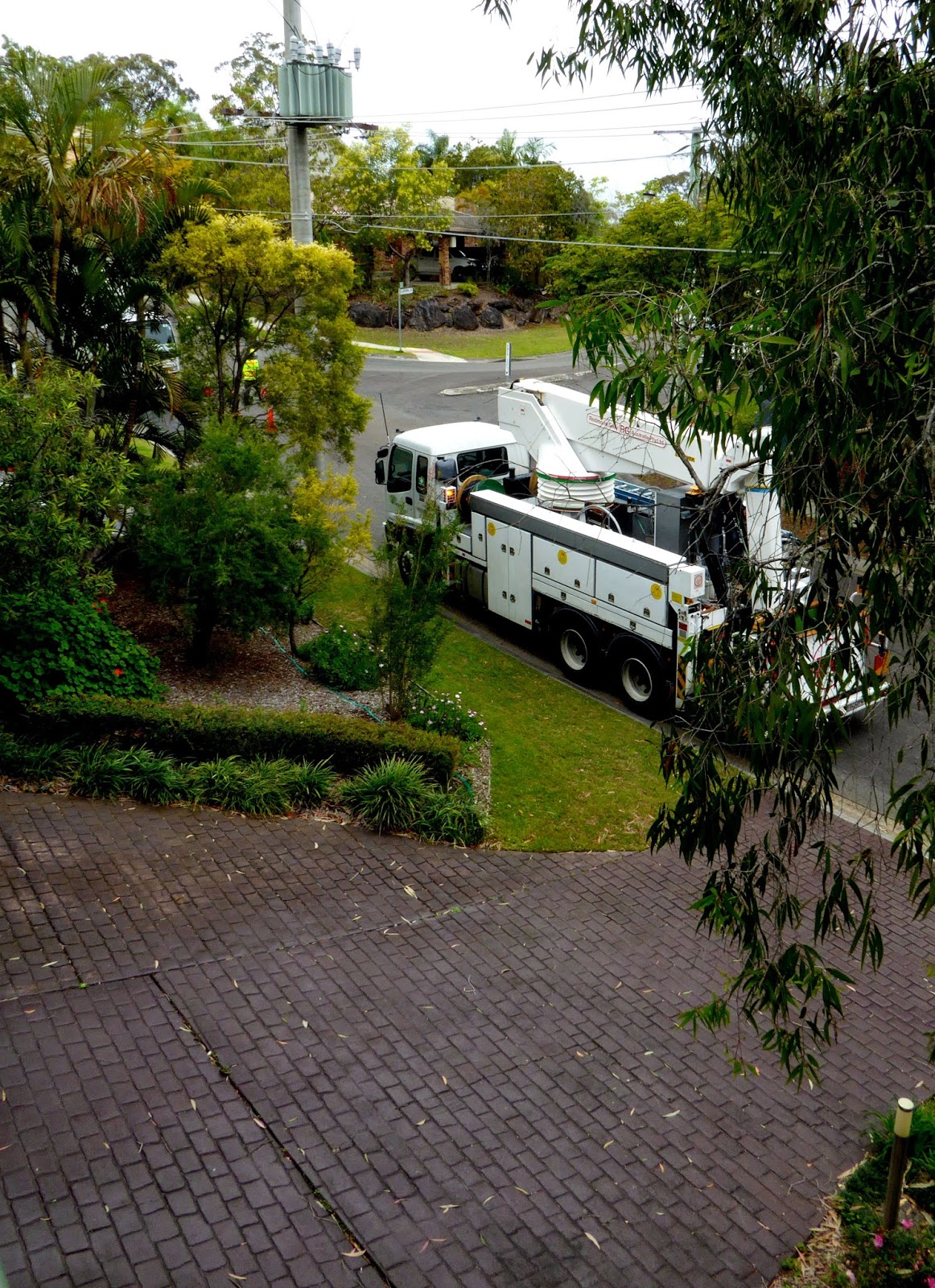 Four vehicles arrived including a couple of very large cherry pickers acompanied by 5 Energex workers and a couple of traffic coordinators.

The first thing they did, remove the large fuses to the high voltage side of the transformer. This is done with isolating poles. 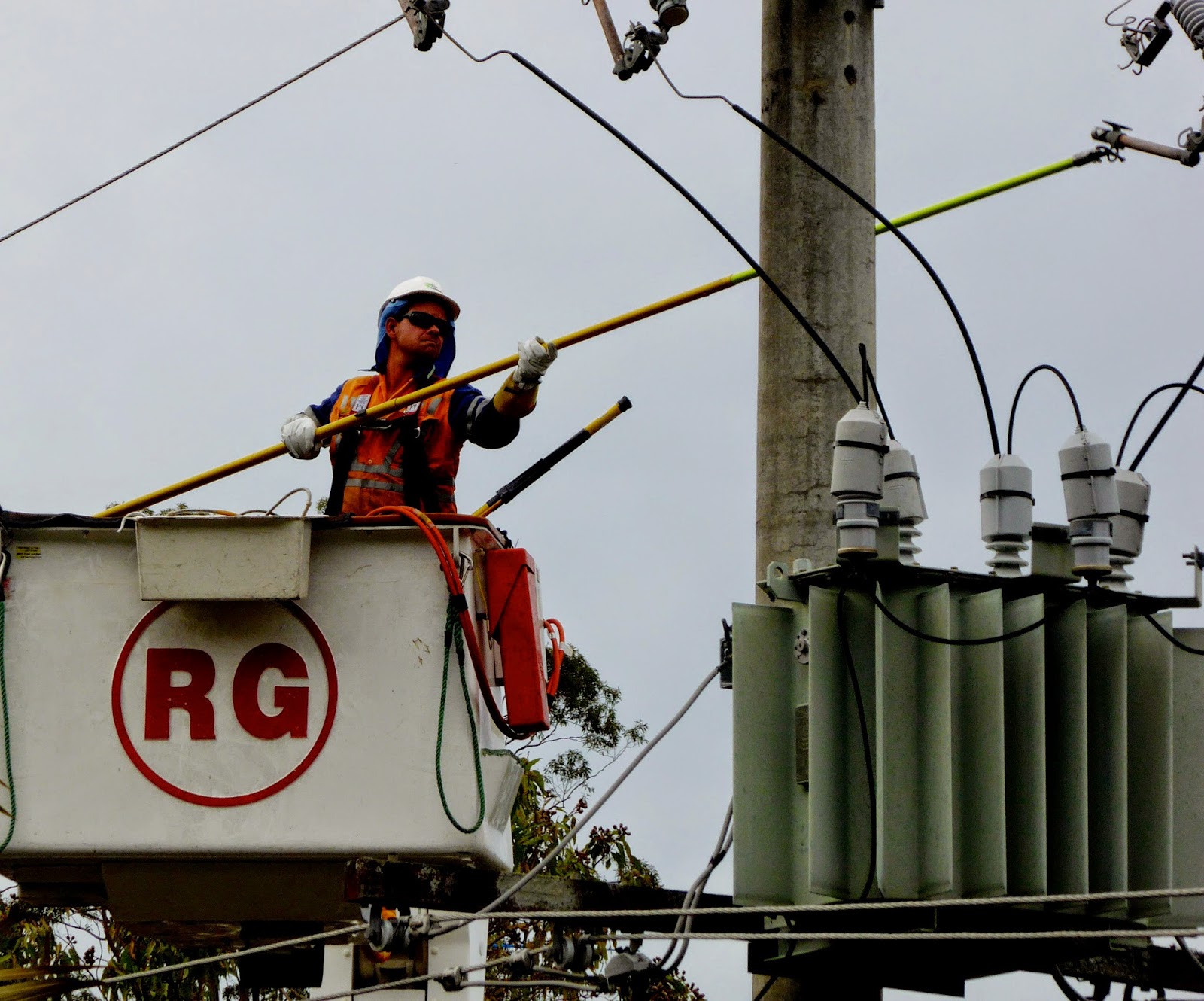 We have a transformer at the edge of our property that transforms the power from 16,000 Volt down to 340/415 Volt, our household currency.

I went downstairs and asked one of the linesmen what they were doing. He told me that they were installing remote censoring equipment, so that the transformer can be monitored from their control room. 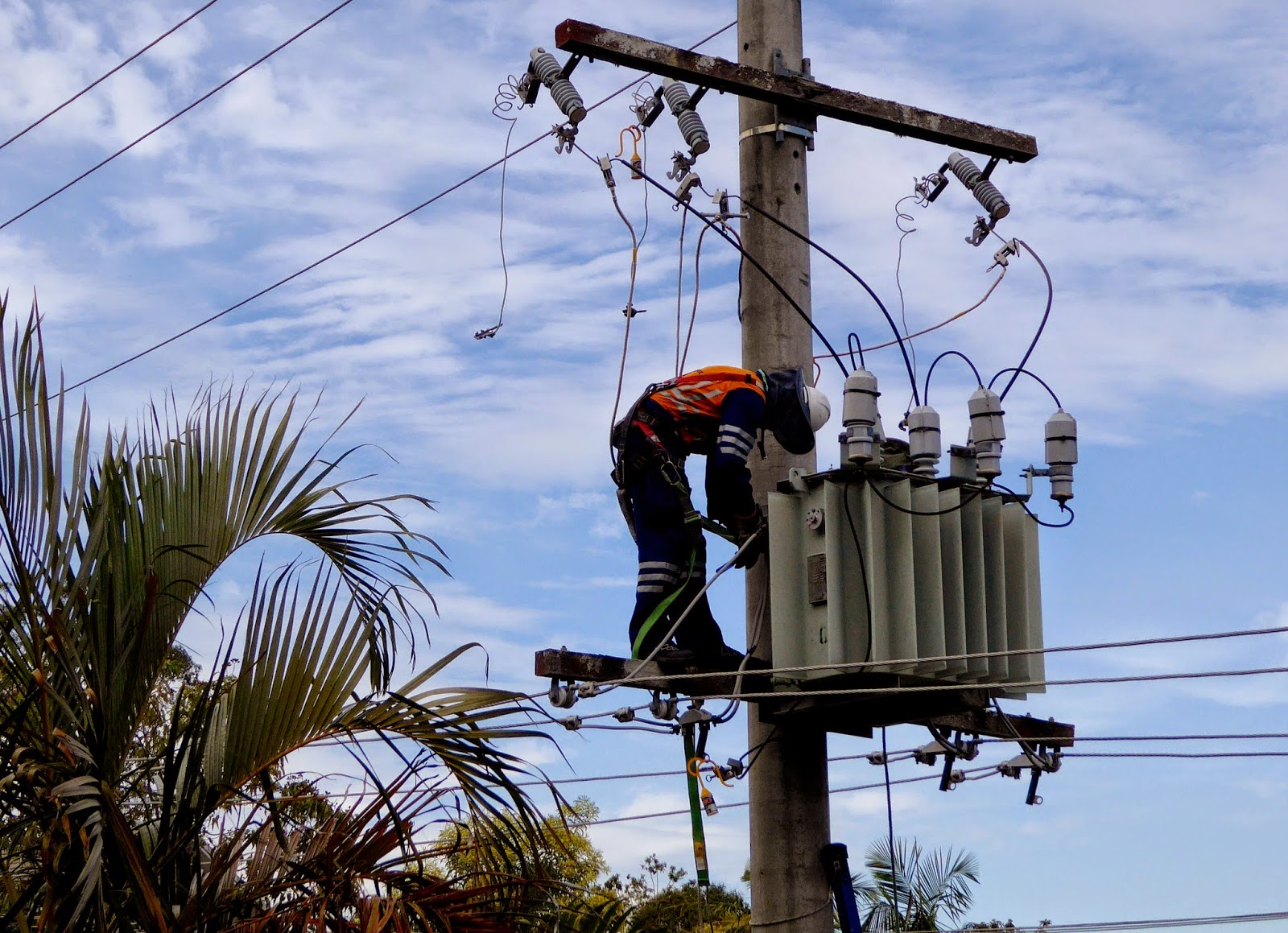 One of the men was working, standing on the crossbar which didn't look all that safe from where I was standing on my deck. 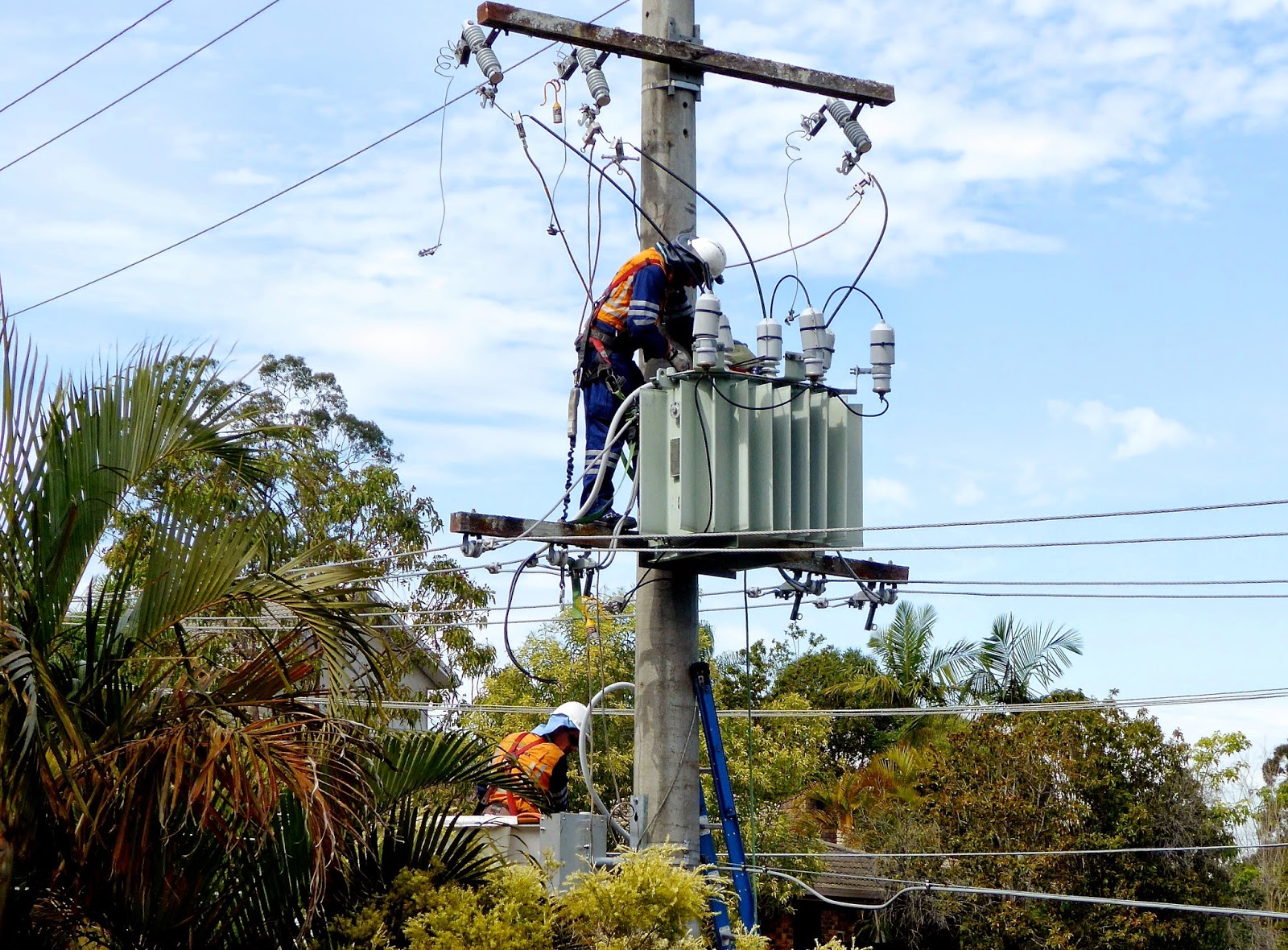 A second man then climbed a ladder and installed the sensor box below the transformer.

From an earlier post, you may remember that we frequently had possums walking over the transformer at night, which tripped the electricity supply and ended their cute little lives. After complaining, they came and fitted those PVC caps over the connections and we haven't had any problems with possums since.

Around lunch time, they reinserted the fuses again and our power was restored again. We were once again able to brew a proper cup of tea. 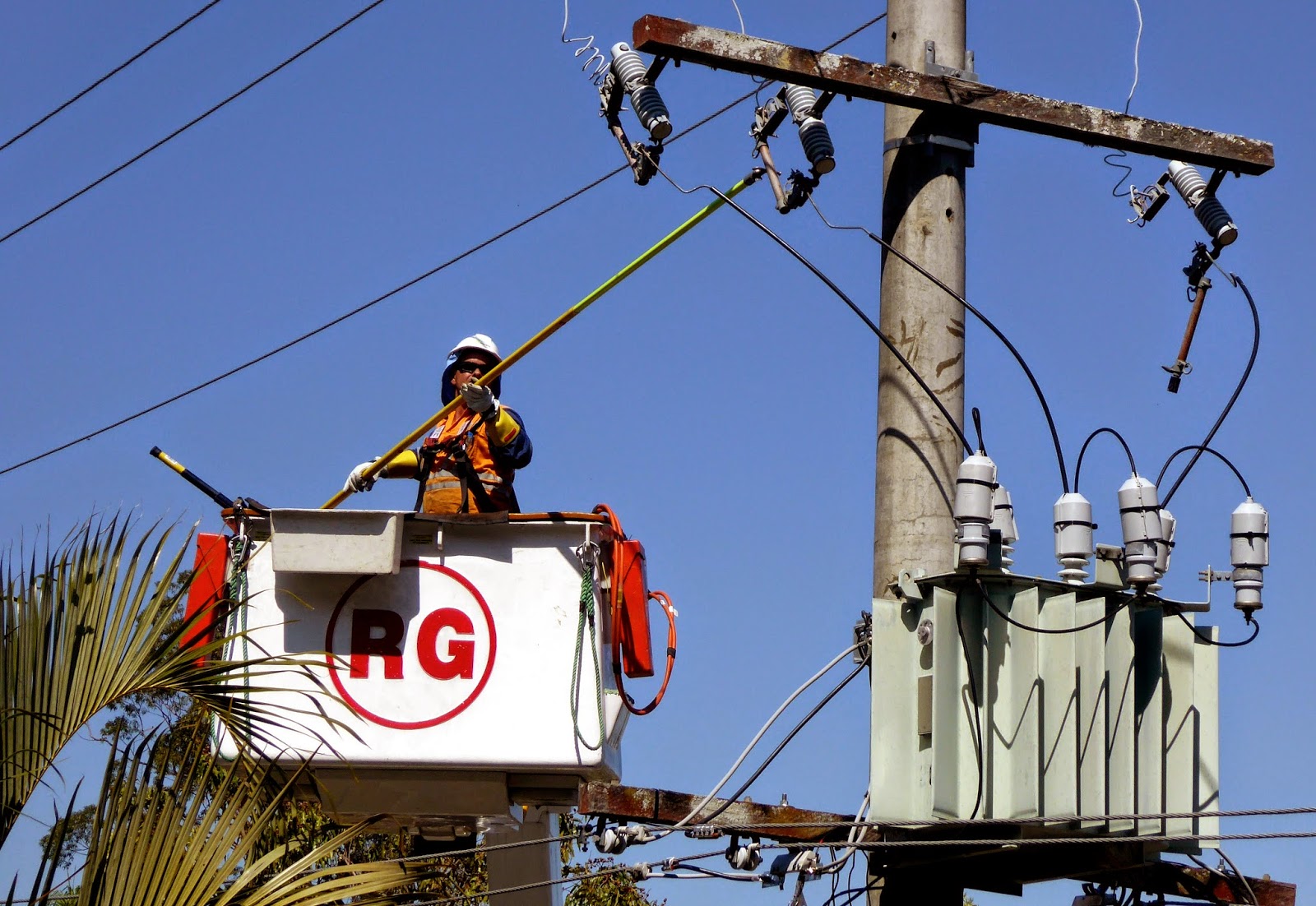