This is part 3 of my old Papua New Guinea slides I converted recently.

If you haven't read the previous couple of posts, I used to live and work in Papua New Guinea between 1967 and 1970. I was frequently flying between towns and consequently saw a lot of this fascinating country.

While staying in Madang, the owner of the motel drove us into the hills where we visited this native village.

The houses are built off the ground to stop animals from entering and to provide some cooling. It is very hot on PNG, all year around, 24 hours a day so any type of cooling is welcome.


As soon as we arrived, the picanninis (children), came to check us out. The villagers were very friendly and always welcomed visitors.

The men were out hunting gathering and left the womenfolk to look after the villages. The women were pottering, producing ware they would take to the local markets to sell,

Of course, they also looked after the children and small farming animals such as pigs and chickens.


In Manus Island, we worked in the Australian navy base, 'HMAS Tarangau'. We were building the communications building. I employed a young boy by the name of Pius, to help me with the electrical installation. He had just left school and was looking for work. He was a good worker and willing to learn. He showed me how to get coconuts straight out of a tree, by climbing up without ropes or ladders.

In Wewak, in the Sepik District, we played soccer on the beach on a Sunday and before long, the local kids joined us in the fun. The kid standing in front of me is wearing my sunnies.

Also on a beach in Wewak, I took a picture of this woman carrying her shopping home in typical New Guinea fashion with a net carried with her head.

It is such a shame that the people in Papua New Guinea can't get their act together. It could be a fantastic tourist destination for people around the world. Instead, the country is dominated by corruption and fighting and today is one of the most dangerous places to live. I am so happy, it was paradise in the 60s when we lived there.

This is part 2 of my slides from my time in Papua New Guinea in the 60s. I was travelling a lot throughout the territory as it was then known and came across a lot of plane wrecks from WWII, when the Japanese occupied the territory. But I also had some dangerous flying experiences while getting around.


On one of my trips to the border town of Vanimo, we returned back to Wewak in the Piaggio (Below). About half way into a 2 hour flight, we came across a solid black wall of a storm ahead of us. I was sitting next to the pilot. He radioed Wewak and told them of the storm. They instructed him to try to fly around it. We banked left and had the wall to our right while we were cruising along it. It really looked like a solid wall.

After about 30 minutes, the pilot reported that there was no way we could fly around this wall and we didn't have enough fuel to return to Vanimo. After some debate between the control tower in Wewak and the pilot. it was decided to do an emergency landing at Aitape, a copra plantation on the way. The tower alerted the station owners. By now it was getting dark. The owners send some Toyota 4X4s to come and light up the air strip so we could land.

We made it and the pilot taxied the plane to higher ground as the rain can flood the air strip, sometimes for days. We were transported to the plantation just as the storm hit. We were fed and spent the night there and in the morning, were able to resume our trip back to Wewak.

I was rummaging through a box of old stuff and came across some slides I took while living in Papua New Guinea between 1967 and 1970. So they are 45 years old. I pulled out the slide scanner and got to work. After I converted them into digital format, I had to do some serious manipulation of them to bring them up to reasonable standard, removing tons of grit and scratches.

Here is the first batch, subject 'Markets.' They used to be and most likely still are an integral part of life in Papua New Guinea


The sign below tells people that the local council has set the sales process for food which traders must adhere to:
Carrots - 6 for 1 Shilling
Corn - 10 for 1 Shilling and so on 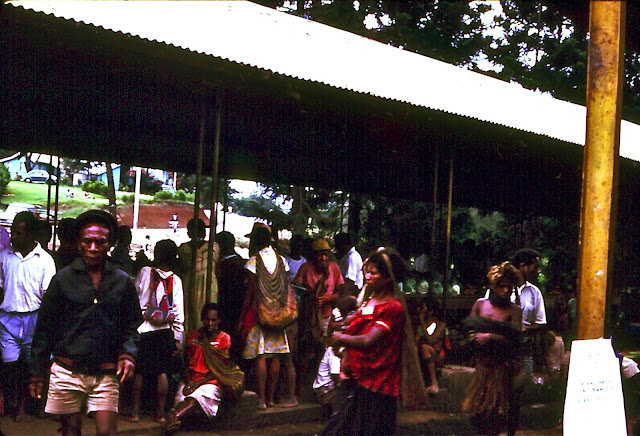 The sign below, in pigin inglish, proclaims that:
Men and Women cannot buy food and spit all about in the market or will be taken to court and will be fined $200 or even go to jail.


I had a chat with these two brothers who walked for two days to get to the Goroka Markets with a few bananas and some root vegetables.

Our house needs painting, inside and out. In the past, we've engaged painters to do it. But now that we are retired and have spare time on ours hands, we decided to have a go at it ourselves. At least the interior. For the exterior, we'll have to get a professional company in. So off we trundled to the paint suppliers, picked up the necessary tools and paint to start the interior.

We started off with the back entry (not shown) then we continued along the kitchen wall.

Our ceilings are quite high (5 meters) so out came the tall ladder.


The edges done, I start with the roller.
Even though I have an extension rod for the roller, the roof is too high up to reach, so I have to do it on the ladder. 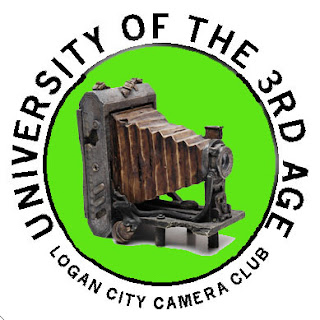 Next Monday, the U3A Camera Club is going on a photo shoot of surf and sand on the Gold Coast, so today, a few of us headed to Currumbin Beach for a 'Recky'. Kathy picked us up in her open top car. It was a nice Queensland winter day, so why not.