Today I'd like to tell the story of a remarkable ship that would not die. 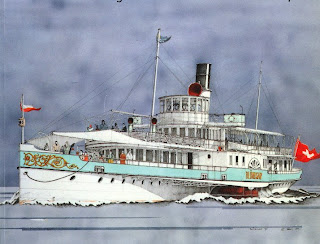 In March 1905 the steamship company that owned a fleet of passenger steamers on the lake of Thun (pronounced Toon) in Switzerland, ordered a saloon steamer from the Escher-Wyss shipyards of Zürich. The boat named 'DS Blümlisalp' was commissioned on the 31 July 1906 and serviced the people around the lake as well as thousands of tourists for over 60 years.
The company, decided unanimously on the 20 October 1969 that the DS Blümlisalp should be scrapped and replaced with a more modern Diesel ship which they ordered and named MS Blümlisalp. The communities around the lake were not happy with that decision. And when on the 1st of August 1971 their beloved paddle steamer DS Blümlisalp sailed onto the lake for the very last time, there was outrage. 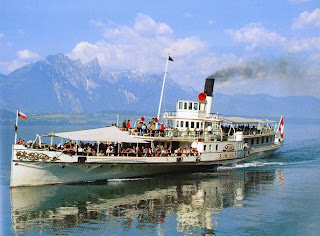 DS Blümlisalp in its heyday
Newspapers throughout Switzerland carried stories about the death of the paddle steamer D.S. Blumlisalp.  However, the company was relentless and they had the boat towed out of their shipyard and tied up in bushes until they could decide where to place her. 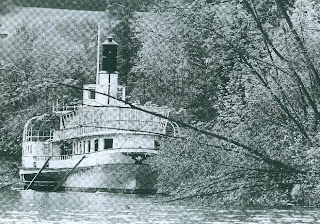 The ship is anchored out of the way
It was finally decided to tow her into a disused quarry where she could sit and rust and eventually sink. 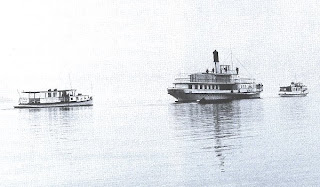 The DS Blümlisalp on it's way to her grave 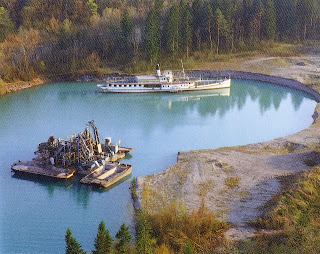 In her final resting place
In the meantime, the people around the lake formed a group called 'Friends of Steam Boats' with its aim to keep the DS Blümlisalp alive. They petitioned the owners and governments but their pleas fell on deaf ears. Weekends were used by volunteers to go and maintain the boat. Rust was constantly removed and repainted. 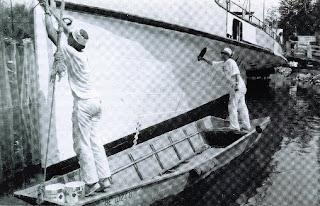 Volunteers paint the hull
The engine was polished and greased and generally kept in first class operating condition. 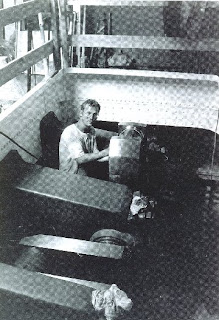 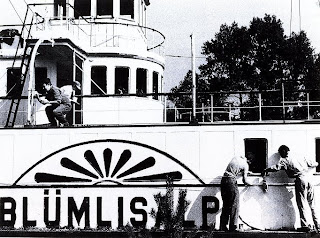 Volunteers remove rust and paint the ship
On numerous occasions the company complained to the authorities that 'vandals' had broken into the quarry and had damaged their property. In fact, Friends of Steam Boats' used to camp on board the ship precisely to prevent vandals from damaging the ship. 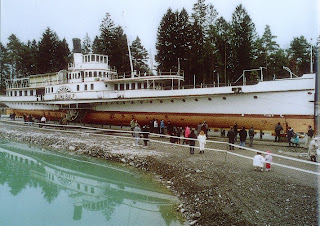 Open Day for public to inspect the boat
After 17 years in exile, the Friends of Steam Boats' had finally put enough pressure upon the owners and local, cantonal and federal governments that the company decided the Friends of Steam Boats' could have the boat and transferred the ownership to the by now renamed Vaporama group. Since they had lost the battle and if the DS Blümlisalp was once again to be taken into service it needed major renovations. 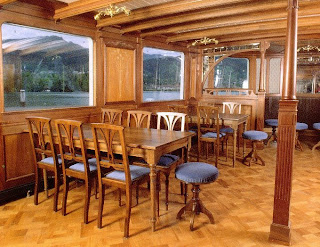 The saloon, the highlight of the ship
These renovations were completed and on the 24 April 1992 the DS Blümlisalp sailed out of the quarry for tests and was found to be once again seaworthy. 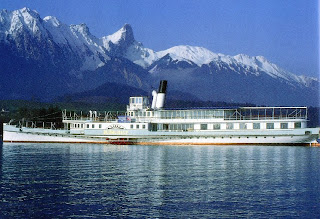 The DS Blümlisalp during a test trip 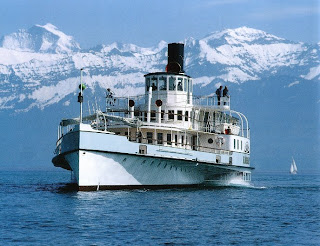 The DS Blümlisalp back in service
In September 2008, we were in Switzerland and traveled on the DS Blümlisalp for lunch. My schoolmate Roland who is a member of the Vaporama Group organised for me to go down into the engine room to film the young female engineer who operated the engine single-handedly.  A real honour and not something that anyone can do.
To see this young lady in action, please view my short video here:
As you can see in my film, the captain up on deck issues his commands into a speaking tube which can be heard in the engine room by the engineer via a trumpet bell. She in turn acknowledges his commands by an electric bell.
Posted by wilbo43 at 15:44 8 comments: